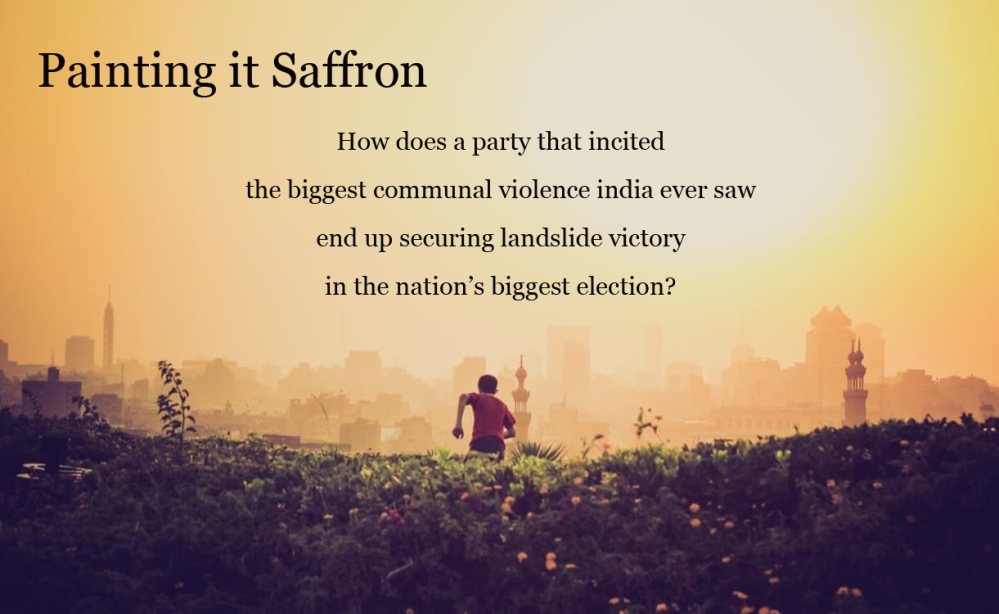 The 2002 Gujarat riots, till date remains one of the major incidents of communal riots in India. Leaving more than 2000 dead and may more injured and scarred for life, the riots shook the core of the nation and questioned the souls of every Indians. Yet how does, a political party so deeply involved in the riots and the leader still questioned on his authenticity of his actions, raise up to become a national phenomenon and capture the biggest election in the country.

The Uttar Pradesh elections presented an enigma that many are yet to comprehend. The magnitude of BJP victory in sheer terms of numbers questioned all the predictions and expectations. The elections presented a rare phenomenon, where one man raises up to become a national phenomenon, and it can be safely stated that Narendra Modi was the first and foremost cause of the massive landslide victory. His words development, nationalism, “Make in India”, permeated down to  the lowest stratas of society and these words acquired a larger than life meaning among the masses.

The BJP has always worn its communal badge and flaunted it with pride and challenged the very notion of secularism. But indeed it was a surprise when the Prime Minister of the nation insisted no to bat a single Muslim candidate in U.P, but it proved to be an excellent tactical approach in breaking the opposition’s stereotypes, that have ruled the Indian politics for generations.

Demonetization, which was a fuelling topic for the election debates, seemed to have worked out in favor of BJP. Demonetization was not just devaluation of currency, but also grew to be a major change in the political functioning. Narendra Modi played the strategy very efficiently. He succeeded in making demonetization speak out in a political language rather than economic absolutes. He successfully banked his actions on the notions of patriotism and nationalism. His words were so strong that anyone questioning his actions came to be branded corrupt or anti-national. He portrayed himself as an anti-corruptions crusader, successfully striking a chord with the poor as an anti-rich activist, aimed at redistributing the nation’s wealth, thereby rendering the congress and BSP inefficient in becoming a poor people’s party

The U.P election victory was the result of a clearly laid out symbolic strategy. While Amit Shah laid out the tactics, Mr. Modi embarked on a campaign to capture the imagination of the masses. His notion to do away with hierarchical politics and build a society that was mobile and which provided more opportunities for the lower striates, captured the minds of the new generation voters and the old election houses equally. Also he developed himself into a symbol of the underdog who rose to the top notches of the political world, this combined with his oratory power and his muted muscularity swung the dalit and poor vote bank in his favor and rendered the Congress and BSP ineffective .

BJP has played very well in effecting its strategy , Modi has seduced the imagination of the masses into a wild hope of building a better future for each and every individual. The elecetions once again confirmed that BJP  has grown form a communal party to a national phenomenon and has at the same time established its feet firmly in the grass roots of Indian society. But what does all this mean for the future of our nation?

Taking the simple and evident facts into account, here is a political party that played a major role in almost every communal violence that took place in our nation, a part that flaunts its communal badge in pride, they state and exhibit an extreme religious and communal outlook and  the people have given them absolute power  now. For a country where a major fraction of people still stumble in the darkness of poverty and where superstitions and religion controls the mind of the mass, the developmental super way and a mobile society is distant and disconnected dream.

We live in a society where the women are still vulnerable and fighting for their safety, where intolerance grows day by day, where poverty and violence is common, where the rich gets richer and poor stays poor, yet people have given power to a political party that promotes religious divide and extreme communalism and violence, a party which plays hardball religious politics under the mask of developmental goals and digitalized economy.

The U.P elections present to us a juggernaut, whose presence can make or break our nation; an entity that has power to plunge is into dark ages or make India a superpower. That’s the irony the results show. We don’t know what we have given power to..